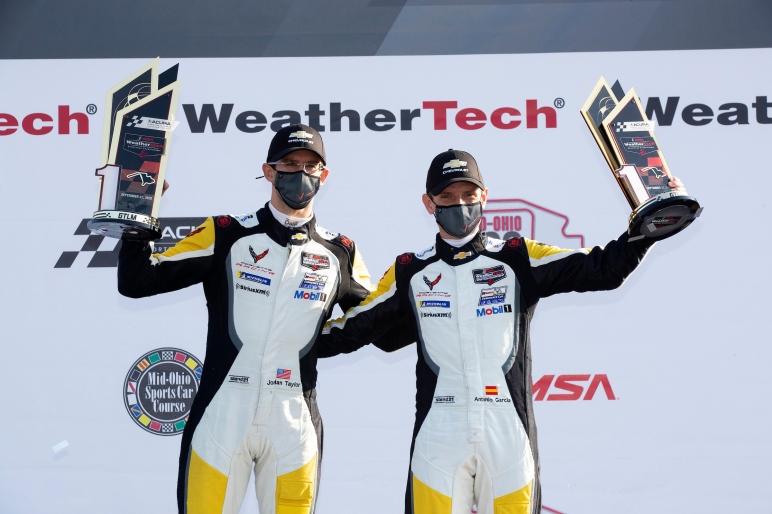 The result extended their lead in the GTLM Drivers Championship and Chevrolet’s advantage in the class Manufacturers standings. Corvette Racing won at Mid-Ohio for the ninth time, and Sunday’s victory was the fifth in the first year of the mid-engine C8.R.

Oliver Gavin and Tommy Milner placed second in the No. 4 Mobil 1/SiriusXM Chevrolet Corvette C8.R to remain second in GTLM points. It was the 63rd 1-2 finish for Corvette Racing and third of the year.

Corvette Racing led the entire two hours and 40 minutes – 110 laps in all. Taylor began from pole but Gavin got the jump early and led the first 17 laps before going slightly wide at the end of the backstraight. That allowed Taylor to move back in front, and the No. 3 Corvette led the rest of the way.

Three full-course cautions kept bringing Garcia and Taylor back to the field. The first flew at the 36-minute mark, and both cars stopped for fuel and tires at 43 minutes running. Taylor took fuel and fresh Michelin tires, while Milner got in the No. 4 Corvette, which also got a full service.

The No. 3 Corvette stopped again under the race’s second full-course caution with about an hour to go with Garcia taking over for Taylor.  Milner stopped again for fuel, tires and a final adjustment to try and match the pace of the sister Corvette. The move worked as the No. 4 C8.R remained almost glued to the back of the leading Corvette while holding off the pair of BMWs in third and fourth.

Milner got as close a half-second and at one point held the fastest GTLM lap of the race before Garcia responded and reset fastest time four laps later. With no team orders, the two Corvettes continued to race each other hard but fair with Garcia winning by 1.472 seconds.

Unlike the previous seven IMSA events, Corvette Racing has not tested the new-generation Corvette at Mid-Ohio. As a result, the team and its drivers relied on data analysis and correlations from sessions at Chevrolet’s Driver-in-the-Loop (DiL) simulator to arrive at its baseline setup ahead of the weekend.

A test at the Charlotte Motor Speedway Roval – site of the team’s next GTLM race on Oct. 10 – also proved beneficial to the Mid-Ohio success.

ANTONIO GARCÍA, NO. 3 MOBIL 1/SiriusXM CHEVROLET CORVETTE C8.R – GTLM RACE-WINNER: “It was a perfect day and a perfect weekend. We seemed to have a really good Corvette all weekend long. Everything we did worked in the right direction. Being on pole made things a little easier even if we lost track position right away, but Jordan did a fantastic job getting back to the lead and being in control of the race. We didn’t risk doing the driver change on the first pit stop because we didn’t know about BMW’s fuel fill time and didn’t want to lose track position. Other than that, Jordan had a fantastic drive in both stints. It’s a shame we had that second yellow because we had built up about eight or nine seconds over the 4 car, and that would have made things way easier for me! But knowing what Jordan did at the start and on his restart, I knew what I had underneath me. I had to believe the car was really good and was able to do pretty much the same as Jordan. Getting that little gap over Tommy gave me a little chance to breathe especially with all the traffic, which is really important here. It was pretty much a perfect weekend for Corvette Racing and the first win for me at Mid-Ohio and for Jordan, too. We’ll keep going race by race and see what happens the rest of the year.

”COMPARING THE C8.R TO THE CORVETTE C7.R AT MID-OHIO: “This is definitely better. Last year we had a close race. We pushed the Porsche all the way to the end but didn’t have enough. This year the C8.R worked perfectly not just on a quick lap, and the consistency through the stint was the main thing. That allows you to work your way through traffic a little better. The restarts were very strong. The car is very consistent and easier to drive. The C7.R was a good car, as we proved over the years, but this is definitely a step forward.

”MORE ON RACE PREP: “From the test we did at the simulator plus the test we did (at the Charlotte Roval), everything worked together for this race. Every time we hit the track or in the sim, we have an opportunity to develop the car and improve it. I think we did that, obviously. The baseline car we had here really worked. We had to still fine tune things and follow the track conditions, but all the preparations worked in our way.”

JORDAN TAYLOR, NO. 3 MOBIL 1/SiriusXM CHEVROLET CORVETTE C8.R – GTLM RACE-WINNER: “The 3 Corvette was particularly strong all weekend. We led all four sessions – both practice sessions, qualifying and the race. I think we just had a little bit more speed on everyone else all weekend. The balance was really strong from the get-go. That says a lot for the team to come here for the first time with the C8.R with no testing – just simulator time – and rolling off the truck so strong. We only had to make minor adjustments to get it to where we wanted. It speaks volumes for the team and the preparation for today. It’s another good day for us, our fourth win of the year and fifth for Corvette Racing. It’s hard to complain about anything at this point.”

WINNING AT MID-OHIO: “We’ve both been racing at Mid-Ohio for a long time. I’ve had a couple of close races here, and I’m sure Antonio has as well. Just like Road America, it was our first time winning there so anytime you check that box, it’s pretty special. The track is definitely a lot different, unique and technical. The first practice was very difficult. A lot can happen in these races here, like we saw today. Everything has to go right. Thankfully for us today, no one made a mistake on track, the guys were perfect in the pits and on strategy.”