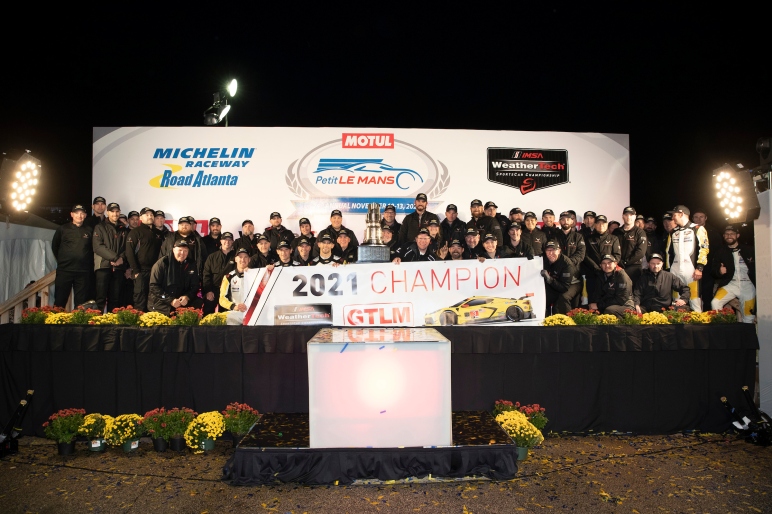 “Chevrolet is proud to win the 2021 Manufacturers Championship and the final for the GT Le Mans category,” said Jim Campbell, Chevrolet U.S Vice President, Performance and Motorsports. “The mid-engine Corvette C8.R is building a strong legacy thanks to the ‘One Team’ approach of the Corvette race team, our powertrain engineers, and Corvette production engineers and designers. We are excited to continue the development of the C8.R onward in 2022.

“Congratulations also to Antonio García, Jordan Taylor and everyone on the No. 3 Corvette C8.R team,” Campbell added. “This was a challenging season in many aspects but the competitive spirit within the two Corvette C8.R teams has never been stronger.”

Chevrolet and Corvette Racing won seven times in IMSA entering Petit Le Mans including 1-2 finishes in the Rolex 24 At Daytona and the three most recent rounds of the championship. Corvette Racing also claimed pole position in each GTLM race heading into Petit Le Mans.

After winning five times during their 2020 championship run, García and Taylor backed that up with four wins to date including the Rolex 24.

García won his fifth IMSA title, tying Oliver Gavin for the most among all Corvette Racing drivers. The rapid Spaniard took pole positions at Sebring and the Watkins Glen Six Hours and was the fastest GTLM driver at Sebring.

Taylor is now a four-time IMSA champion with two in GTLM to go along with a pair of Prototype titles. The American has five pole positions to his credit this season – all consecutively from the Watkins Glen Six Hours to Long Beach.

No. 4 Corvette C8.R teammates Tommy Milner and Nick Tandy wrapped up second in GTLM points with the start of today’s race. They also were contributors in the Manufacturers Championship with three victories and two pole positions.