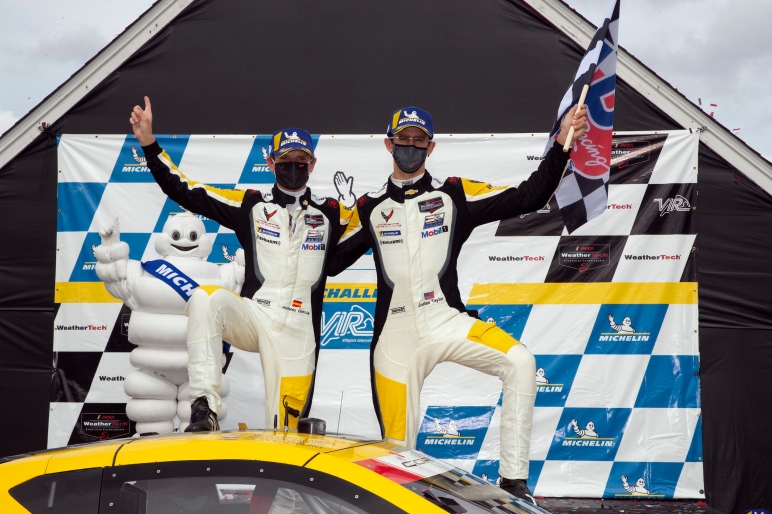 Third win for No. 3 Corvette C8.R, team’s fourth straight since return to racing

It’s the second win in a row for the García/Taylor combo, their third of the season and the fourth consecutive win for Corvette Racing – the first time that’s happened for the team since 2014. Garcia and Taylor extended their lead in the GT Le Mans (GTLM) Driver’s Championship, as did Chevrolet in the Manufacturer’s standings.

Oliver Gavin and Tommy Milner placed fourth in the No. 4 Mobil 1/SiriusXM Corvette C8.R, just missing making the podium again with their teammates. The result was enough to keep Gavin and Milner third in GTLM points heading to Michelin Raceway Road Atlanta in two weeks.

García, Taylor and the No. 3 Corvette will enter on one of the team’s hottest streaks in almost five years. For the second race in a row, they were the beneficiaries of late-race misfortune for the race leader but this time had to survive their own drama inside the final 20 minutes.

Taylor started the race fifth but worked his way up to second in the first 30 minutes before making his first stop at the 30-minute mark. An error in the pitlane sent the No. 3 Corvette back to fifth, but an inspired drive and bad luck for his fellow competitors meant he pitted from the lead with less than 55 minutes to make the hand-off to Garcia.

One of those unlucky cars was the No. 4 Corvette, which went off-track shortly after a restart when Gavin picked up debris on his tires prior to the race’s third and final restart after full-course caution just an hour into the race. Try as he might to clean off the pick-up and easing his way through VIR’s final corner, the Corvette still went wide and onto the grass across from pit entry.

Gavin recovered nicely and carved his way back through the slower GT Daytona cars and was behind the No. 3 Corvette in only seven laps. He stopped for fuel, tires and driver change to Virginia native Milner with 65 minutes to go with hopes of another yellow to tighten the field back up.

Meanwhile, García had settled into second place but faced a 13-second gap to race leader Nick Tandy once the final GTLM pit cycle completed. The No. 3 Corvette got the break it needed with 17 minutes left when Tandy was forced to pit with a tire issue, sending Garcia to the lead.

In a race filled with uncertainty, there was still a little left for the No. 3 Corvette. García reported a vibration at the rear of the car from a damaged diffuser, just as Tandy went into the pitlane. It impacted the balance and handling of the Corvette, but Garcia held on to take a 3.521-second margin of victory.

Corvette Racing’s next event is the TireRack.com Grand Prix at Michelin Raceway Road Atlanta on Sept. 4-5.

ANTONIO GARCÍA, NO. 3 MOBIL 1/SiriusXM CHEVROLET CORVETTE C8.R – RACE WINNER: “Things are definitely going our way. We can’t complain about that! To do this, you need a fast car and a team to perform the whole time. We have that. We had our issues like the other teams did, but the main thing is that the ones we had were early so we could recover right away. Jordan did a really good job in his middle stint to drive back and maintain the gap behind the leaders. When I jumped in, the race was pretty much done. All I could do was keep some pressure on the 911 and not let him get away and have an easy race to the end. But we had our issues at the same time. They lost another tire and we had an issue with our diffuser. At first I thought it was terminal because it felt really bad. Once I got used to it, I could tell it wasn’t really interfering with the performance. I had enough of a gap to the 25 by about 12 or 13 seconds. With that, I could manage that in a way. It was very stressful to keep going but not knowing what would happen if the diffuser came off. Thankfully the C8.R is very strong all around! I’m very grateful for everyone at Team Chevy and Corvette Racing again. We just need to keep this momentum.”

DID YOU HAVE ANY CONTACT WITH ANYONE OR DID THE DIFFUSER COME LOOSE BY ITSELF?
“It just went. It was literally when I was watching the 911 go into the pitlane. At the same time, I had a massive vibration and I thought I had a tire blowing up. It was scary because it would have been a full lap back to the pits. Then I realized it was speed-related and wasn’t bad all the time. It took me three or four laps to be kind of cautious. Once I realized it was hanging on, I stepped up my pace a little bit more to make it difficult for the cars behind me to catch up. I was happy that traffic wasn’t too bad at that time and I could manage to stay ahead. ”

WHAT WERE YOU FEELING SPECIFICALLY BEHIND THE WHEEL, AND DID YOU KNOW WHAT IT WAS?
“It took me a little bit, but the whole car was shaking a lot. At about 200 kph, the entire car was shaking. I knew it was coming from the back, but even the front end and front grip were moving around. The rear grip definitely was the same so maybe we were a little bit faster down the straights after that! Who knows. It was challenging to drive. Once I figured out what lines to use and not hit the curbs to keep both tires on the ground, it went my way a little bit.”

JORDAN TAYLOR, NO. 3 MOBIL 1/SiriusXM CHEVROLET CORVETTE C8.R – RACE WINNER: “My time in the car was good. The Corvette C8.R has a pretty good cooling system, so it was nicer in there than it was watching! Heading into the race, our main objective was points. Seeing how strong the Porsches were on pace, we knew they were going to be hard to beat. We focused on our own race, and it came to us in the end with attrition and not making mistakes. We made one little hiccup in the pits but we were able to recover from that pretty quickly. At the end, Antonio was able to maintain a gap to second when he needed to, even with the vibration at the end. He did a great job of overcoming that. It’s an amazing day for Corvette Racing – the fourth win for the C8.R and third win for us. I’m definitely happy with this part of the season.”

WOULD YOU AGREE THAT THIS WAS A RACE OF SURVIVAL? ALMOST EVERY CAR HAD A PROBLEM AT ONE POINT.
“It felt like an endurance race with all the issues everyone was having. A lot of guys were making mistakes… going off-track, pit stop issues and tires. For us, it was about damage control and minimizing mistakes. Today was out-of-character in IMSA to see this many issues happen. I think we had the least amount of mistakes, and that’s why we won.”