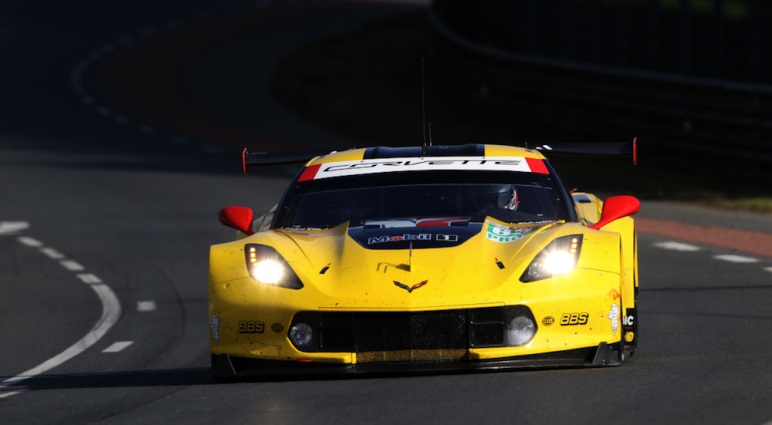 LE MANS, France (June 2, 2019) – Ahead of its 20th consecutive appearance at the 24 Hours of Le Mans, Corvette Racing clicked off eight hours of running on the race’s annual Test Day with its pair of Chevrolet Corvette C7.Rs. Corvette Racing drivers were first and third in the 17-car GTE Pro category in the only running the Le Mans field will have before official practice and qualifying commence in 10 days.

Mike Rockenfeller was the quickest driver for Corvette Racing during the test session at 3:54.001 (130.240 mph) in the No. 63 Mobil 1/SiriusXM Corvette C7.R that he will drive with Antonio Garcia and Jan Magnussen. Perhaps no driver benefitted more from Sunday as Rockenfeller, who missed last year’s Test Day due to a previous commitment.

Teammate Tommy Milner was third-fastest with a lap of 3:54.036 (130.239 mph) in the No. 64 Mobil 1/SiriusXM Chevrolet Corvette that he shares with Oliver Gavin and Marcel Fässler.

Rockenfeller led a group of 12 GTE Pro cars within one second of each other, an astounding fact around an 8.4-mile circuit. Le Mans is a mix of permanent race track and public roads, and the Corvette Racing teams spent the entire eight hours tuning and setting up the two Corvette C7.Rs for handling and a solid race package – not necessarily ultimate outright pace.

The pair of Corvettes combined to complete 166 laps and covered more than 1,400 miles. The only issue was a minor mechanical one on the No. 64 Corvette C7.R that cost it a minimal amount of time in the garage. Other than that, the Test Day was fairly routine.

This is a landmark year at Le Mans for Corvette Racing. No team is on record as having made more than 20 consecutive appearances, and the program has won eight times in 19 tries. What’s more, Corvette Racing’s Le Mans record also includes eight runner-up class finishes and nearly 100,000 racing miles completed.

Le Mans is the final race in the FIA World Endurance Championship Super Season. There is a total of 17 entries from five manufacturers in the GTE Pro category.
Each of the six Corvette Racing drivers own exemplary records at Le Mans:

The 24 Hours of Le Mans will air live on the MotorTrend Network with coverage of practice, qualifying and the race on Radio Le Mans.

MIKE ROCKENFELLER, NO. 63 MOBIL 1/SiriusXM CHEVROLET CORVETTE C7.R – FASTEST IN GTE PRO: “It’s always good to be quick but as everyone knows, today doesn’t count. It counts on the Sunday when the flag drops and the race is over. Today was really good for me to get used back to the Corvette. Today I was able to get in a lot of laps and went through a lot of tires to get confidence, which helps. For me personally, I’m very happy. In the afternoon, the track conditions were where they should be so we were able to collect a lot of data. We are very happy with that.

“The Corvette C7.R is the exact same car from last year. In the end, we tried to establish a base setup. We did a little bit of tuning but not much – normal stuff like camber and dampers. Then we really tried to learn about the compounds we have available from Michelin. We tried to learn in which temperature window to use which tire. I was in that program, so that was quite nice!

“The GTE Pro class is really the place where there will be fights among the manufacturers just like years before. We’re all looking forward to that. It’s super hard, and you have to fight for every tenth of a second. There is no margin for error.”

ANTONIO GARCÍA, NO. 63 MOBIL 1/SiriusXM CHEVROLET CORVETTE C7.R: “Things were good today. This is one of the few years where weather respected the test, and the conditions were very consistent. Our running time was good; we were close to 100 laps. That means we have a lot of data to analyze. We definitely ran through all our program we had planned and then some. That’s always a good feeling. So I’m happy. We need to gather everything, see what we have, where we can improve and then put everything together for the race. Yes we were fastest today but I don’t think that means anything. I don’t know what the other teams are doing, so we need to wait until raceweek to see where everything is exactly. This is a good starting point. We all hope the package we bring to the race will be enough.”

JAN MAGNUSSEN, NO. 63 MOBIL 1/SiriusXM CHEVROLET CORVETTE C7.R: “It isn’t at all important to be quick on the Test Day. We are here testing and going through our program, including knowing the WEC Michelin tires a little better. For us on the 63 Corvette, getting to know the tires at the WEC race at Sebring was a little bit of an advantage. But this is only our second time so we still have a lot to learn. So far so good. I think everyone is pretty happy. We didn’t have any issues on our Corvette throughout the day, which is good. We shouldn’t because this is such a well-proven car.”