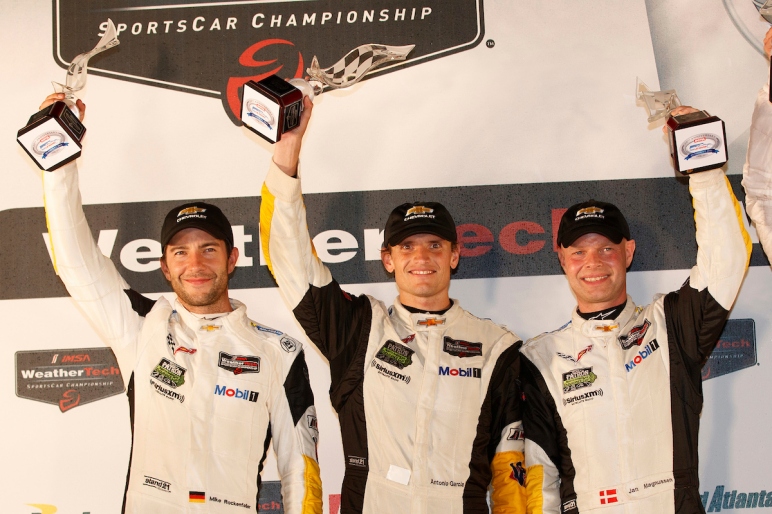 The 10-hour endurance race in the rolling hills of north Georgia was a classic in every sense of the word. The top seven GTLM cars finished on the lead lap, and rarely were they separated by more than 30 seconds.

Six cars led in GTLM over the 392 laps and just under 1,000 miles. The No. 3 Corvette led four times, but even more key were the positions that the team gained with excellent pit work and strategy throughout. Especially key was a late stop for fuel and tires that put Garcia, who started and finished the race, into second place after entering the pits third. That solidified Chevrolet’s hold on the Manufacturer Championship with 50 minutes left.

García ended one second back from the winning BMW with Milner only 21 seconds further back.

The latter’s late-race effort was particularly stout as he passed three cars in the final five minutes. He opened the race in tricky wet conditions and handed off to Gavin with Fässler driving the middle portion of the race. Creative strategy and more stellar pit work kept the No. 4 Corvette within sight of the leaders for much of the day

The 2018 IMSA WeatherTech SportsCar Championship opens with the Rolex 24 At Daytona on Jan. 27-28.

ANTONIO GARCÍA, NO. 3 MOBIL 1/SiriusXM CHEVROLET CORVETTE C7.R – FINISHED SECOND IN GTLM: «I really cannot expect anything else. We gave it all we had until the last lap. Actually for a moment, I thought I had some chances for a win when an hour before I thought it was done. That is the spirit of Corvette Racing. That has been the spirit all year long. We never give up. Big thanks to Jan and the whole crew. For me it was very, very easy for me to believe I couldn’t make it to the end because I was in the car for three hours. After one hour, I was like ‘Don’t tell me I have to do another two.’ They really kept motivating me. That is part of their job and I am very thankful for that. Big thanks to Team Chevy, the whole Corvette Racing team and the whole Corvette community. I think other than maybe Long Beach, this was a perfect season, so thank you all!»

JAN MAGNUSSEN, NO. 3 MOBIL 1/SiriusXM CHEVROLET CORVETTE C7.R – FINISHED SECOND IN GTLM: «A fantastic day and a fantastic race. The whole category has been so close all day long. It was difficult to really make a difference out there… to pass people. You kind of had to wait for mistakes, but nobody made mistakes. Traffic could sort of play into it, so it was kind of waiting for the right place and the right time to take advantage. We had great strategy. Beating the 67 Ford out on that last stop was very important. That Ford got taken out by a prototype later on, but it was important for us to get out ahead if for nothing else than to prove a point.»

MIKE ROCKENFELLER, NO. 3 MOBIL 1/SiriusXM CHEVROLET CORVETTE C7.R – FINISHED SECOND IN GTLM: «Congrats to Corvette Racing. It’s amazing what they achieved this year, especially Antonio and Jan; they had a fantastic year to win the Driver Championship. The Manufacturer Championship was secured for Chevrolet so I think we fulfilled almost everything this weekend. We wanted to win as well, but the BMW was too strong. Congrats to them. It’s been a good year with Corvette Racing. The three races I did were really strong. The win at Sebring was really strong and very competitive. At Daytona we were strong, just not quite enough to win. And here at Petit Le Mans we were in the hunt for the victory. So I am I am very happy, and I hope I can be back with the team. I did my best to help as much as I can. It’s not always easy to jump in as the third driver without so much seat time, but my teammates help me a lot. It is just great to be part of Corvette Racing and I’m looking forward to the future.