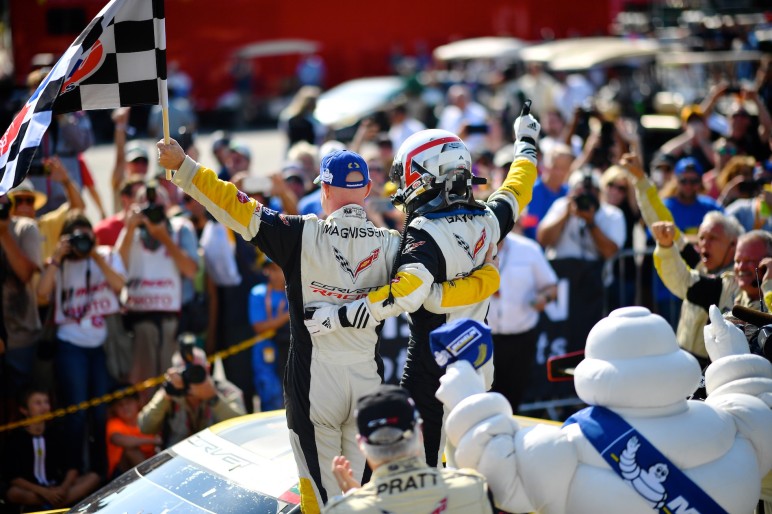 The victory increased the pair’s lead in the IMSA WeatherTech SportsCar Championship’s GT Le Mans (GTLM) Driver’s standings. The result also moved Chevrolet back into first place in the Manufacturer’s Championship with two events left. It also marked Corvette Racing’s 106th all-time victory dating back to 2000 – three of those coming at VIR.

Tommy Milner and Oliver Gavin appeared set to join their teammates on the podium of the GT-only race before late contact knocked the No. 4 Mobil 1/SiriusXM Chevrolet Corvette C7.R from second-place. Milner drove a storming final stint and had just moved up from third with pass going into the braking zone of the track’s long backstretch, but the two cars went off track and briefly stalled.

Milner was able to rejoin the field, but a punctured tire as a result of the collision added insult to injury. He and Gavin eventually finished sixth.

Out front, both Magnussen and García drove measured stints after starting sixth on the grid. Magnussen drove the first 51 minutes and weathered several close calls with slower competitors. He pitted from third to hand over to Garcia, who rejoined fifth.

The final stop for the No. 3 Corvette saw García rejoin in third place and directly ahead of his closest championship competitor. After two stellar laps on cold tires to build up the grip on the Corvette, García set sail for the lead two cars. The No. 62 Ferrari went off-track from second place with 32 minutes to go, and the lead BMW was forced to pit for a late-tire change with 10 minutes left.

Up until that point, García had taken impressive chunks of time out of the lead as the lead car was questionable to make it to the end of the race on fuel without a yellow flag period.

Corvette Racing’s next event is the America’s Tire 250 from Mazda Raceway Laguna Seca on Sunday, Sept. 24.

ANTONIO GARCÍA, NO. 3 MOBIL 1/SiriusXM CHEVROLET CORVETTE C7.R – GTLM RACE WINNER: «It was another long day at the office, but it was a good one. It is definitely good to have competitive pace and remain up front. That was something we weren’t used to in the last few races. We had a really, really tough middle stint where Ferrari and Ford were strong, but I was able to keep up with them. I didn’t know how much fuel they were saving, so I didn’t know what pace we were doing. I think the key was stopping one or two laps longer than the Ferrari and the Ford because I had really clear laps from those two, in the low 1:42s that made me so close to the Ferrari and especially to be ahead of the Ford coming out of the pits. That was 90 percent of the race… that pit stop and being able to get in front of them. It was a very hard two laps coming out of the pits on cold tires but I knew if I was able to do that most of the race would come down to that. It was keeping the pressure up on the Ferrari to force a mistake, and we didn’t allow the BMW to run very slow to make it to the end. That is part of racing. I think we definitely deserve this one.»

JAN MAGNUSSEN, NO. 3 MOBIL 1/SiriusXM CHEVROLET CORVETTE C7.R – GTLM RACE WINNER: «It’s unbelievable for us to come away with a win. Honestly, in the middle of the race it kind of looked like a situation of ‘OK, we aren’t losing too much in the championship – a couple of points here, a couple of points there, but we would still stay in the lead of the championship.’ Then for things to turn around like they did in the last half-hour with the BMW coming up short (on fuel) and the Ferrari falling off… crazy, absolutely crazy result. This is such a fantastic result for the whole team. In a race like this with no yellows, which we kind of knew it was going to be, you can’t really take advantage of strategy. There are very few knobs you can turn in that situation. I think the crew, Antonio, just everybody on saving fuel to start with and then going at the end putting a lot of pressure on everybody… this is fantastic!»

DOUG FEHAN, CORVETTE RACING PROGRAM MANAGER: «This just goes on the long list of races where odds and statistics might indicate we would not have a good chance of success. But when you take our engineering, our strategy, our drivers and our crew into account, those are the reasons why we have won 106 races. Today was a demonstration of all those things coming together – as we are known for – and once again we executed according to our plan.»