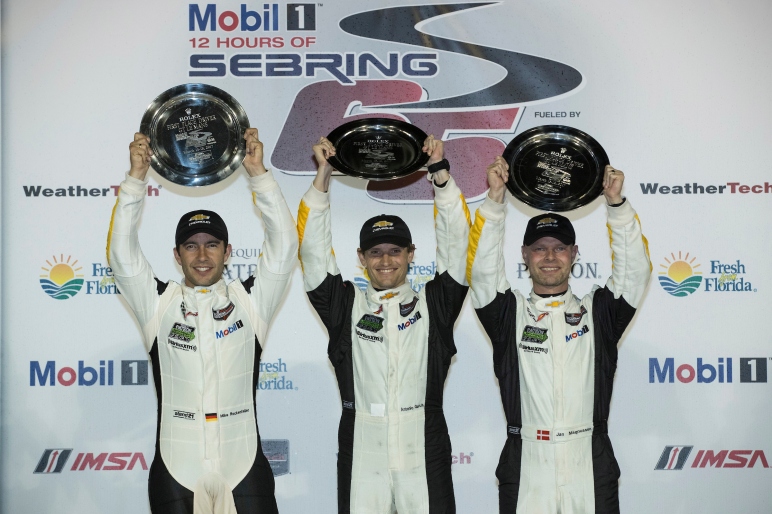 It ended an amazing comeback for the No. 3 Corvette, which ran sixth as late as the eight-and-a-half-hour mark of the IMSA WeatherTech SportsCar Championship’s second round. After maintaining through difficult conditions and bad luck in the afternoon, a series of strategic calls, strong pit stops and exceptional driving resulted in another Sebring triumph for America’s sports car.

García drove a stunning final two hours and 53 minutes to claim victory. He led the final 35 laps and withstood intense pressure from other contenders in the class. While Sebring’s brutal conditions and bad luck began to claim other entries, the No. 3 Corvette and its team ran a nearly flawless race.

Saturday’s victory was Magnussen’s fifth at Sebring, the third for García and first for Rockenfeller. The trio also won the second of four Tequila Patrón North American Endurance Cup rounds of the season.

The No. 4 Mobil 1/SiriusXM Corvette C7.R was forced to retire with water temperature issues that arose in the opening hour. The root cause remained unclear, and it brought an early end to the day for defending class winners Tommy Milner, Oliver Gavin and Marcel Fässler.

García, Jan Magnussen and Mike Rockenfeller each rotated through with two stints each in the first six hours. The No. 3 Corvette C7.R led at the three-hour mark but a combination of greasy track conditions and bad luck with traffic and caution periods hindered its standing at six hours.

An emergency stop for fuel near the halfway point was particularly cruel. Rockenfeller was set to pit for new Michelin tires, fuel and the exchange to García but the yellow flag ruined that plan and strategy. Instead, Rockenfeller had to stop for five seconds of fuel and then again one lap after the GTLM leaders completed their stops.

Fortunes reversed for the No. 3 Corvette with a timely full-course caution with four hours left. A perfect pit stop moved Magnussen from sixth to third on a restart. That the stage for the late-race heroics.

The next event for Corvette Racing is the Bubba Burger Sports Car Grand Prix on Saturday, April 8 from the Long Beach (California) street circuit. The race will air live at 4 p.m. on FOX. Live audio coverage from IMSA Radio is available on IMSA.com.

ANTONIO GARCÍA, NO. 3 MOBIL 1/SiriusXM CHEVROLET CORVETTE C7.R – GTLM RACE WINNER: “I knew it was going to be really, really tough. Since yesterday in qualifying it was super close, the first two hours I managed to make my way up to P2. I did two hours first following the No. 66. Then I did that third hour and I was kind of sick of following Fords. So at some point I just needed to go. We made that really good call to come in with the Ferrari. So the Fords stayed out on a poorer set of tires than us. I knew that had to be my stint. That first stint with two or three stints to go, I needed to make the moves and pass the Ferrari. I passed the No. 68; I passed (Scott) Dixon. I passed everybody because I knew it had to be done then because that was probably the only time they would be a little bit weaker than we were. It worked. At the end the Porsche looked very, very strong. That second-to-the-last time they pitted quite a bit later than us, and they were flying. They passed all the way up to us until that last safety car. Again, there was a magnificent stop by the Corvette Racing crew. I think the Porsche made a mistake there. Without knowing, I thought it was Joey (Hand) behind us, but it was again the Porsche. I knew it was going to be tough. I didn’t know if I was going to be able to hold him , but probably. The car kept going faster and faster. When you lead the way, the aero works pretty decent compared to when you follow someone. At the end things went a little bit in our favor. It was a sprint to the end. I can’t believe what Corvette Racing did today. Just awesome. Amazing.”

JAN MAGNUSSEN, NO. 3 MOBIL 1/SiriusXM CHEVROLET CORVETTE C7.R – GTLM RACE WINNER: “I don’t even know where to start. What a fantastic race. It was a tough race… a hard race. I mean I am so happy about this. The boys did a great job with the pit stops. Antonio’s last stint there was just fantastic. What can you say? It is just fantastic. It was all about running our own race and then at the end when we had to do something, to then be able to do it. The crew – those last couple of pit stops – awesome. As I said Antonio’s last stint… just fantastic!”

MIKE ROCKENFELLER, NO. 3 MOBIL 1/SiriusXM CHEVROLET CORVETTE C7.R – GTLM RACE WINNER: “It is still hard to believe right now because I didn’t expect it.  We had a tough race, and Antonio (García) did just a fantastic job – like always. But it is very special what he got out of the car today. That is why I am speechless. I am very happy for the team. Thanks to Corvette Racing and everyone on the teams – all the mechanics and engineers. They always believe. We had a tough start in Daytona and even here. We weren’t the quickest all the time, but at the end when it counted, we were there. This team is just amazing!”

DOUG FEHAN, CORVETTE RACING PROGRAM MANAGER: “I think what we saw tonight may have been the most intense mix of tremendous engineering and strategy from our engineering crew and flawless pit stops all day long by our Corvette Racing crew. Then there was the driving exhibition that I’m sure will be a highlight of Antonio’s career – certainly at Corvette Racing. When you put those three elements together, we are hard to beat. It was an amazing demonstration by everyone at Corvette Racing.”